Festival in its LIGHT version

Due to anti-coronavirus restrictions, part of the Letní Letná program had to be postponed to next year. However, in response to the easing of the situation, we decided to give the International Festival of Contemporary Circus and Theater to the audience this year as well. And in a LIGHT version. The 17th year, therefore, took place from 18 to 25 August traditionally in Letenské sady in the middle of Prague.

The grand opening of the festival this year was arranged by the Spanish ensemble Voalá with exceptional performance. The production Voalá Station introduced the audience to the "art of flying" and elevated them with the most beautiful emotions. The main star was the French ensemble Galapiat Cirque and the world premiere of the show by the genius artist Lucho Smit L’âne & la carotte. The open-air stage turned into a summer cinema for one night and screened the documentary Skywalk Above Prague. Viewers had the opportunity to remember last year's unique opening.

Two leading new circus ensembles, the Cirk La Putyka & Losers Cirque Company, prepared a unique artistic combination. The spectacular show Be Together amazed the audience with its diversity and energy. Both ensembles showed their work also separately. Visitors also had the opportunity to see a performance of the VOSTO5 ensemble, the juggling duo Bratři v tricku, young new circus artists as part of a composed evening called Circus Miniatures, Feel The Universe Circus Company, and a traditional juggling show, this time at the open-air stage. For the first time, the AirGym Art Company ensemble performed at the festival, which presented two performances, clowns from Studio Underground or artists Rozálie Havelková and Anežka Hessová with the premiere of Rozladené držky. As every year, there was also a rich program for children. 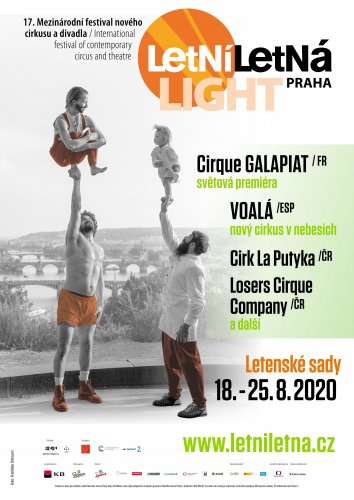