The best of the Czech and international contemporary circus scene. Theater, workshops, activities for families with children…


Following the relaxation of the COVID-19 measures, we decided to go forward with Letní Letná in a different, lighter version.

The meadow by Hanavský Pavilion is going to host a large open-air stage where Czech and international contemporary circus companies will perform. “We made the decision not to rob the spectators of the festival atmosphere and to let them have a cultural picnic at Letná. We are currently finishing the program and trying to bring several international shows,” explains Jiří Turek, the head of the festival.

The premiere of A Skywalk Over the Vltava documentary which captures the opening of last year’s edition of the festival including some powerful moments from behind the scenes will take place at Letní Letná Light. World-renowned funambulist Tatiana Mosio-Bongonga walked a 350-meter rope with no safety harness 35 meters above the Vltava river. “Incredible stories full of emotions and suspense begin to form during the filming. The screening will be a memory of last year’s opening but also a symbol of overcoming challenges that life brings,” says Ivana Pěkná, producer of the documentary and festival manager.

Of course, every festival day will offer a rich program for families with children. Festival visitors can also look forward to circus and art workshops and to two stages with shows for children. “We believe that the audience interest will be exceptional even though this year's edition will only be a shorter, one week version of the festival. We hope that despite all the pitfalls and improvisation, we'll offer our audience a one-of-a-kind cultural experience,” concludes Jiří Turek. 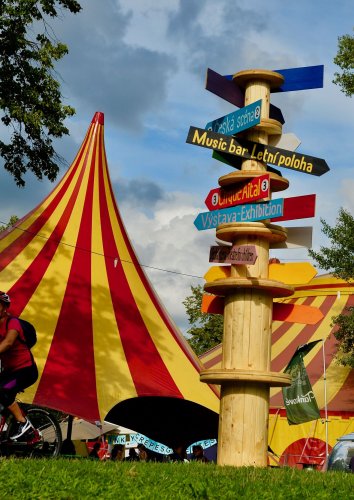