Selection of the Best of This Year’s Letní Letná!

The 19 th edition of the International Festival of Contemporary Circus and Theatre Letní Letná Prague has attracted 60,000 visitors. From August 11 to August 31, they had the opportunity to witness 208 different performances full of acrobatics, a children’s programme, and interesting workshops.

The festival commenced with the Swedish ensemble Cirkus Cirkör, a well-known and loved group in Czechia, who performed an adjusted version of their popular hit Knitting Peace. The beginning of the festival was also graced by the attendance of the director Tilde Björfors. This year, once again, the performances of the Swedish ensemble were completely sold-out and appraised by standing ovations.

The second foreign ensemble, the lively Compañía de Circo „eia“, didn’t falter behind their Scandinavian colleagues one bit and quickly enchanted the audience with their vivaciousness. In the second half of the festival, their every repeated performance Nuye filled the festival tents with spectators.

An optimistic surprise were also Monckton & Peden & Votkin with their performance Optimismi.

Czech contemporary circus is given large space in the programme of Letní Letná every year. This year, the festival was opened by the AirGym Art Company ensemble with the premiere of their new performance called NonSen(s). The premiere was successful just as their next performance at Letní Letná titled Hotel Laputa. The popular Losers Cirque Company, who had the Czech tents for two evenings, also sold out all tickets for their performances. The plays Grandiózní and Kuriózní prove that the Czech contemporary circus scene is a bold competition to the international scene. The light show inspired by the principle of Camera Obscura presented by the Žongléros Ansámbl from Pilsen left the audience doubting who they were actually watching. The original play of the author Ondřej Holba titled And Who Is Useless Now? introduced the topic of artificial intelligence into contemporary circus. Young talents were also given their time to shine at the festival – the students of Czech circus schools grouped in the Teens Cirkabaret ensemble eagerly showed their talents to the festival audiences.
A specialty of this year’s edition was a large representation of female artists, including several solo female performances. Ariadna Vendelová in the performance All My Skirts. Lenka Švolíková used the vertical rope in the performance Sandwritten dealing with the theme of interpersonal relationships. Eliška Brtnická performed a circus adaptation of her documentary performance Hang Out in which she contemplates how children of the past generations used to spend their time. The aerial acrobat Klára Hajdinová performed In the Circle where she “goes around in circles” with psychopharmaceuticals and therapy. The fifth female soloist of the festival programme was Thula Moon, an artist from Hawaii, whose project Through the Truth was created under Czech production.
As a “snake woman”, she excels in it in aerial disciplines and contortion. Another strictly female performance was obnaŽENA by The Same Self ensemble.
The open-air stage offered a rich programme, too. Letní Letná was opened by a spectacular fire Propane Punk show which attracted more than 1,000 spectators. The open-air stage hosted the AirGym Art Company who revealed the Secret of the Clouds in their acrobatic clownery. The artist duo Koťátko zkázy (Kittie of Doom) accompanied by the music of Tante Friedl exclaimed: Ahaaa! And Bratři v Tricku (Brothers in Trick) with their endless supply of humour performed their juggling miniatures in their Brothers’ Special. The Juggling Day’s Galashow gave everyone a tour of all the various forms of juggling.
The festival has also hosted a programme for children, from toddlers to teenagers, at an independent scene with almost 90 performances. Among the most popular ones were, for example, Rainbow Bubbles by Václav Strasser, The Ark of Light by the Theatre of Víťa Marčík, and the Swiss clowns Compagnia Due.
The accompanying programme was just as vivid as the main one this year. The merry-go-round of the woodcarver Matěj made the heads of both children and adults spin. The inventiveness of the new edition of interactive toys Guixot de 8 made from fitness equipment surprised everyone. And Health Clowns along with Patient Puppets appeared this year, too. Festival attendees could enjoy juggling
workshops, face painting, crafting workshops, or free concerts.
Everyone who came to enjoy a relaxed, summer atmosphere, a colourful food zone, and a festival in a beautiful park in the centre of Prague, was welcome in Letenské sady.


Let us relive the atmosphere of the 19 th edition of Letní Letná in the recap video and the selection of the most beautiful photos and moments from our photographer František Ortmann. If you happen to miss Letní Letná a bit, you can visit our online store and purchase some of our original merchandise! 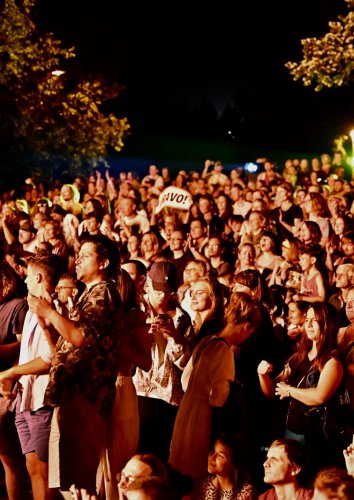